The great majority of neck fat lies quite superficially under the skin. Beneath the fat there is a layer of muscle called the platysma, which acts as a barrier between the fat we liposuck and the vital structures of the neck. So trained and specialised doctors can perform liposuction to the neck with safety.

Thinking about a face-lift? In these cases, liposuction alone, first, can improve neck contours and lighten the whole face. Many patients undergoing a lower face-lift would get more natural results, would avoid  scars, and would save thousands of dollars if they had liposuction first. Liposuction can defer your need for a face lift and improve the final outcome of any face lift you may eventually undergo. Face-lifts don’t deal well with jowl fat. Merely pulling up jowl fat doesn’t remove the fat, and in most patients the jowls just return back down after facelift. All patients in these photos had Liposuction alone.

At Peach we use a four incision approach. A four-incision approach, with the central two incisions placed under the mandibular line and a little lateral to the mid-pupillary line brings several advantages. Less work needs to be done through each incision, so the incision is less stretched and abraded. The area directly under the chin is treated obliquely from each of these two incisions with thus less chance of vertical ridging and easier criss-crossing. There is easy access to the jowls from each of these incisions, easy access to the lateral portion of the anterior triangles and easy criss-cross against the sublobular incisions. The incisions heal very well and generally look no worse than acne scars and, if placed in a wrinkle, can virtually disappear altogether. 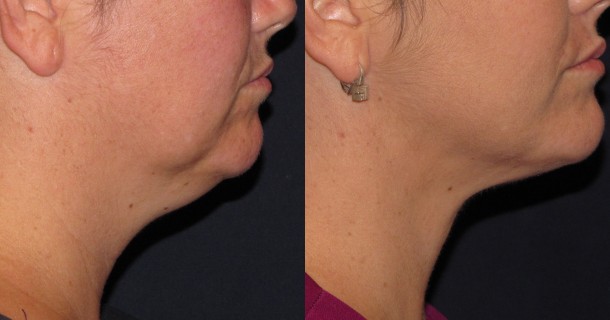 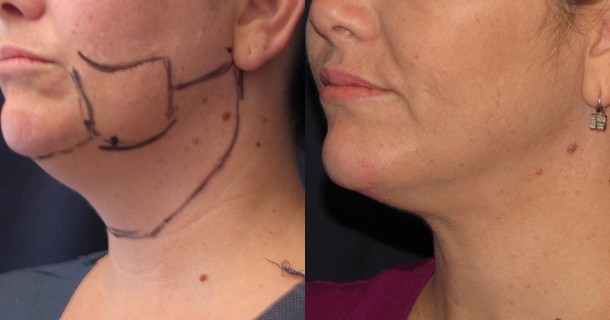